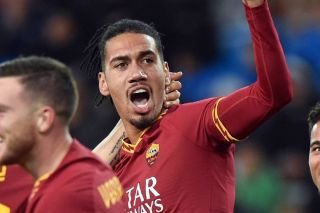 Chris Smalling continues to impress at Roma, and a bunch of Man Utd fans have shown a touch of class by wishing the defender well for the rest of the campaign.

The 29-year-old left Manchester United on loan following the arrival of Harry Maguire. It was thought that he’d be surplus to requirements for Ole Gunnar Solskjaer’s defence, though there’s now a possibility that United could want him back.

Few would have predicted how well Smalling has adapted to life in Italy. Italian football writer David Amoyal summed it up brilliant in a tweet on Wednesday night, stating the following:

No summer preparation with his new team, had to adapt to a new league & being a vegan in capital of carbonara and has been nothing short of sensational

Meanwhile, the AS Roma Twitter account gave us more insightful into how everybody is loving Smalling at the moment which is great to hear.

Smalling has now made seven appearances across all competitions for Roma, and they’ve conceded just five goals in the games he’s been involved in.

The Serie A outfit kept another clean sheet against Udinese during the week, and Smalling even made an impact at the other end of the pitch as he bagged his first goal for the club in a 4-0 win. Watch goal via Caught Offside.

Given his deal only runs until next summer, Sky Sports have reported that Smalling is expected back at Old Trafford next year.

Nevertheless, it could come down to the player wanting to stay in Italy because it sounds like Roma will be more than happy to keep him.

See below as a number of United fans react to Chris Smalling’s tweet:

Happy for you mate. Keep making united proud. We will always love you for all your dedication to the club👍💉💉💉

All the best & you are welcome back at OT in my eyes…It’s easier now we have a right back as well.

Well done bro buzzing for you ✌🏻

Has to be said. Well done you are killing it!
Many many more of them and long may it continue!

Happy to see you doing so well @ChrisSmalling 👍💪