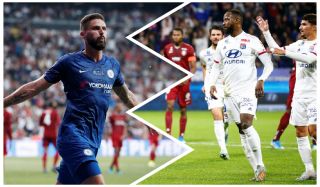 Man Utd have seemingly received a boost as Lyon have reportedly made contact with Chelsea striker OIiver Giroud amid speculation linking Moussa Dembele with a move to Old Trafford.

After allowing Romelu Lukaku and Alexis Sanchez to leave this past summer, Ole Gunnar Solskjaer has without question made a mistake in not replacing them.

That has put further responsibility on the likes of Marcus Rashford and Anthony Martial, but as a pair they’ve done well together.

However, Rashford on his own failed to fill to void whilst Martial spent two months out injured. It was far from ideal and the pressure mounted on Solskjaer because United weren’t scoring goals, therefore, not winning games.

They still need to improve.

The Sun via Soccer Link note that Lyon are said to have made contact with Giroud as they eye the Chelsea forward as a possible replacement for Dembele.

With the 33-year-old struggling for regular game time under Frank Lampard this season, this may be the perfect opportunity for him to return home and retire in France.

Dembele would offer greater scoring threat up front for United and thus far in a Lyon shirt, the former Fulham and Celtic striker has netted 26 goals in 56 outings for the Ligue 1 outfit.

Time will tell if anything happens but it could work out for all parties involved if Dembele joins United and Giroud heads to Lyon.