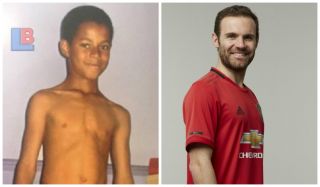 Marcus Rashford has been getting a lot of love on social media the past 24 hours.

For a player so heavily criticised this season — more often by his own fans — Rashford has looked more at home since Anthony Martial returned from his eight-week absence through injury.

The two goals last night against Chelsea certainly help, especially the winner which is arguably Rashford’s greatest goal to date.

But it’s also Rashford’s birthday and he’s been getting plenty of best wishes on social media this morning.

Though there’s one we refuse to ignore!

Juan Mata did some snooping through the archives and found an absolute gem. Wearing a pair of United shirts, a very young Rashford stands proudly in front of his ball.

You can make no mistake about the ball’s ownership because Rashford — or someone close to him — made it clear with pen or marker!

Shortly after Rashford replied and told Mata to stop going through his phone.

Stop going through my phone Juan 🤣🤣

Below are some more birthday tweets directed at Rashford:

Thanks everyone for the birthday love. Would mean the world to me if you’d mark it by getting behind #intheboxmanchester 👉🏿 https://t.co/aUt4Czfi14