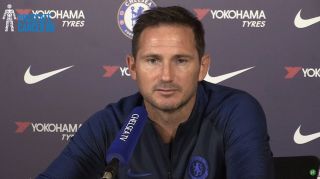 Ole Gunnar Solskjaer’s side approached the game perfectly from the start and allowed Frank Lampard’s Chelsea to use possession without giving them the space to get in behind.

It was all in attempt to hit  Chelsea on the counter-attack, which is how we tend to set up against teams who are willing to come at us.

Rather than saying United were defensive, which wasn’t the case, you could argue that Lampard’s tactics played into our hands.

Of course, two of United’s goals came from set-pieces (penalty & free-kick), but that not a stick to beat another team with because it’s always been a case of who scores most wins the game!

Chelsea had no solution to United’s system and it showed as the Blues only managed two shots on target all match, with one of those being Michy Batshuayi’s goal.

But Lampard feels his side deserved more, as reported by the BBC.

He said: “There weren’t many chances in the first half. In the second half we showed the energy I wanted. We created chances and dominated the game.

“They got a bolt out of the blue to win the game. It’s an amazing goal, you can’t do anything about that. We felt like we were going on to win the game at that stage.

“[The winning run ending was] always going to happen. You can’t go on forever. Even [Manchester] City and Liverpool lose at some point. We changed the team a lot today, made a lot of changes. I thought we were the better team in general play.”

Can’t really expect Lampard to say any different. His players hardly deserved a blocking but it was such a close game.

Neither side exactly dominated, as Lampard tries to make out, though we can take this into the weekend and hope it gives us more momentum.