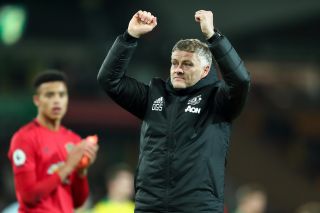 We think after knocking Chelsea out in the fourth round, Ole Gunnar Solskjaer was hoping to avoid Premier League opposition in the Carabao Cup quarter-finals — so a home tie against Colchester United will please him no doubt.

None of the big sides remaining in the competition have difficult ties in the next round as Man City face Oxford United and Liverpool travel to Aston Villa.

Everton host Leicester which will probably go down as the biggest fixture of the round (clutching for straws!).

Our tie, however, should see the likes of Brandon Williams and James Garner get more time on the pitch, although the former is probably in with starting most games in Luke Shaw’s absence.

Check out the full draw below:

Here are the confirmed ties for the Quarter-Final draw, current holders @ManCity travel to @SkyBetLeagueOne @OUFCOfficial, and @SkyBetLeagueTwo @ColU_Official travel to Old Trafford to take on @ManUtd. #EFL | #CarabaoCup pic.twitter.com/4yioU7PtBN

This is a golden ticket into the semi-finals but we shouldn’t underestimate Colchester after the struggles we overcame to beat Rochdale in the third round.

That was a warning call and you can guarantee the Colchester boys will be watching that game over and over again in the lead up to the quarter-finals.