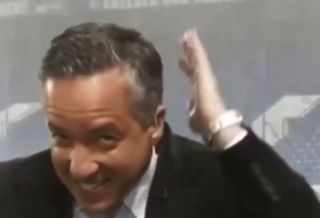 Kaveh Solhekol was unexpectedly sent for an early shower at Stamford Bridge.

The Sky Sports reporter was drenched by a sprinkler while live on air.

READ MORE: Carabao Cup: How to watch Chelsea vs Man Utd online and on TV

Whilst delivering his latest news on Chelsea vs Manchester United in the Carabao Cup fourth round, the journalist was left soaked pitch-side, as seen in the video below:

Ever the professional @SkyKaveh ☂️

Back in the Sky Sports studio, Jim White referred to the hilarious incident as “taking a pebble dashing”.

“Good man, he’s getting an absolute soaking,” he then joked.

This sprinklers should make the surface zippier and allow for the ball to move quicker.

That will help both sides when it comes to passing, but when the surface it too wet it can lead to slipping. Hopefully we don’t concede any goals from such effects.

Anyone know if Kaveh has another suit at the ready?