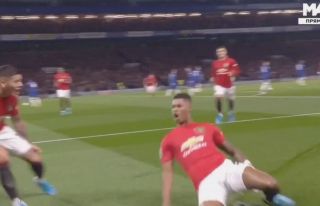 Marcus Rashford has just scored an absolute worldie of a free-kick.

The striker turns 22 tomorrow and it’s set to be a special night for the England international, who already has two goals to his name.

It really is a ridiculous goal — without question our best of the season, and one Cristiano Ronaldo would be proud of.

From distance Rashford has a pop at goal and leaves the Chelsea keeper with no chance whatsoever!