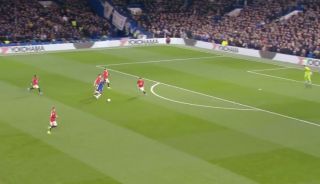 Michy Batshuayi has equalised for Chelsea against Man Utd in the Carabao Cup fourth round.

The tempo difference in this Chelsea side is absolutely enormous in the second half.

Batshuayi made the most of a mistake from Harry Maguire before striking the ball through Marcos Rojo’s legs and past goalkeeper Sergio Romero.

The defending was poor — and it’s a sickening way to throw away a lead after such a good first half.

Watch the goal below (footage from Sky Sports Main Event):

Michy Batshuayi with a beauty! 💙

Ole Gunnar Solskjaer now needs his team to get back into the game, but if the scoreline stays level at full-time the game will go straight to penalties.