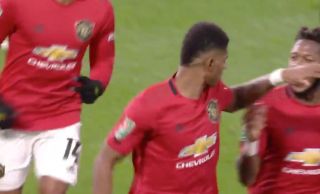 Marcus Rashford made no mistake from the spot as Man Utd take the lead over Chelsea in the Carabao Cup fourth round.

Chelsea started the game strongly, but Manchester United have grown into the game and now Ole Gunnar Solskjaer appears delighted with his players after going ahead in the cup tie.

Rashford, who will be 22 tomorrow, has put a lightening candle on United’s cake tonight and hopefully it is a sign of things to come for the Red Devils tonight.

Daniel James was brought down in the box by Alonso after a failed attempt to win the ball from behind left the referee with no other choice but the award a penalty kick.

This time Rashford scored — after his penalty miss at Carrow Road on Sunday.

Watch the penalty below (footage from Sky Sports Main Event):