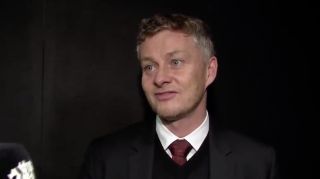 Man Utd manager Ole Gunnar Solskjaer was delighted with the 2-1 win over Chelsea in the Carabao Cup, and especially with Marcus Rashford who scored both goals.

In an interview with MUTV, Solskjaer gives some high praise to Rashford’s stunning free-kick which proved to be the all important winner to book Manchester United’s place in the quarter-finals.

Rashford also gets praise for having “nerves of steel” for putting away his penalty kick in the first-half to give the Red Devils a 1-0 lead.

Chelsea striker Michy Batshuayi scored an equaliser after the interval thanks to some sloppy defending, but United never showed signs of throwing in the towel.

It was the ‘Cristiano-like’ free-kick that won the game for United, with Rashford clearly taking note of Ronaldo’s distinctive technique and emphasis on dipping the ball with power.

However, after praising his striker, Solskjaer gave some insight into his coaching of Rashford.

The boss has always said he wants the young England international to score more scrappy goals, and he drops a hint tonight that Rashford spends a lot (perhaps too much) time practising free-kicks.

Watch the interview below via MUTV:

Solskjaer reveals in the interview that he told Rashford earlier today that he would be on penalties despite missing one at Carrow Road on Sunday. Watch his successful pen against Chelsea here.

Leave him practice some more until he’s scoring them most weeks, eh?