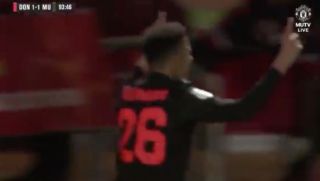 The Man Utd youngster has got some minutes in the first-team this season and we all know what a fantastic talent he is.

However, the fact he was playing against Doncaster probably rules him out of the Chelsea game in the Carabao Cup tonight.

Greenwood, as seen below, dances through the Doncaster defence like they were a bunch of mannequins before finishing beautifully from a tight angle at the very end to claim a 2-1 win.

Check out Greenwood’s last-minute winner below, courtesy of MUTV:

Mason Greenwood gliding past a couple of defenders before scoring a 94th minute for Man United’s U21s tonight. A special player 🔥 #mufc pic.twitter.com/AoQRiteTzF