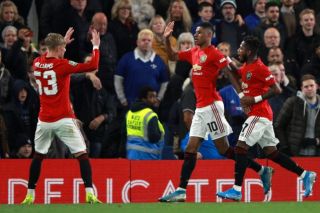 A strong Manchester United eleven proved too much for a weakened Chelsea team, who were dispatched from the Carabao Cup following a world class free-kick from Marcus Rashford. After three away wins in a week, this was a very compact performance that constricted the life out of the Chelsea midfield. There was a lot of industry behind a real team effort that was tactically very astute and will continue to build momentum going into a favourable run of fixtures for the Reds. Some concerns about the fitness of Maguire, but the feel good factor is slowly coming back.

Absolutely nothing to do in the first half, just underlined the strength of the defensive performance in front of him in the first 45. In truth there was little he could do stop Batshuayi for the equaliser, the damage had already been done following mistakes from others. We are still lucky to have Romero who continues to demonstrate a great deal of patience for an international keeper effectively playing second fiddle.

A solid performance from Lindelof, was combative without necessarily being over-stretched. Looked to be playing well within himself in an overall a good defensive performance from United but took a knock and was replaced by Martial in the 66th minute.

Captain again tonight, Maguire wore the armband well and certainly did not look out of place. Indeed, this could be the shape of things to come, if he can continue to remember the coin toss that is. Was commanding, organising all around him and seemed to be enjoying the responsibility. However he was exposed for the Chelsea equaliser, losing track of a header and then couldn’t track back to stop Batshuayi unleashing a long range equaliser on the hour. He picked up an injury in the last 10 minutes, that is the gamble when you play a strong team in the Carabao Cup. With no remaining substitutions, Maguire had to carry on and must be a doubt for Saturday.

More game time for Rojo, who was brought in again to apply some steel in the last third. A typically mischievous display where he always looked on the verge of wrong tackle or losing his composure. Played his part in the strong defensive display tonight but was definitely guilty of indecision as he stood off Batshuayi during the lead up to the Chelsea equaliser.

Rapidly developing a reputation as one of the best defenders in Europe, fans continue to delight in the progress of a young man who looks destined to become a United great. Never really troubled in the first half, Aaron showed great awareness snuffing out a rare first half Chelsea encroachment into the United box. Demonstrated more great link up play with James, those two hopefully will cause teams problems down the right for years to come.

Another exemplary effort from Scott, now well established in the team, he is just going from strength to strength. Was very unlucky not to score early on, following a dangerous strike from a James corner. His quick reactions reminiscent of his goal on Sunday. Was involved in most things good coming from United, interceded with a great tackle to allow James a run on goal to earn a penalty. He did pick up a yellow, although this merely served to illustrate the influence he had over the game, although this could have turned into a red late on. A lot more to come from McTominay.

Typically loose with possession, and dished out a bad tackle on Pulisic, another really indifferent performance from Fred. His best moment came in the second half when he fizzed a cross from a promising United move although was unable to pick out a striker. Did win the free-kick for Rashford’s worldy, but the jury is still out on Fred.

Another good effort from Brandon but he is definitely a rough diamond. He is certainly not lacking in confidence, a reverse move in the first seconds demonstrated his desire to impress early on. Was very lucky to get away with a loose challenge on Hudson-Odoi but it is testament to his game that he kept the Chelsea talent well at bay and who in turn ultimately was unable to make an impression on the game.

Typical Lingard performance, a lot of effort but not much by the way of end product. Saw enough of the ball, but either was caught in possession or his cross was intercepted. Was substituted which really summed up another lacklustre display from a social media influencer who is rapidly approaching the last chance saloon.

Dan James is a handful for teams and is becoming a prolific source of penalties. His mazey run into the box to win a penalty in the first half was typical of his ability to completely wrong-foot his opponents. Tonight’s victim was Alonso, who was made to look second best in what was a clear penalty for United. James continues to be a very potent threat for United and could prove to be one of the best signings for the club.

Basking in his new ‘MR’ social media motif, Marcus didn’t let this deter him and produced an outstanding free-kick to win the game. He struck a wicked long-range effort that swerved beautifully into the top corner of Caballero’s net. Worthy of Cristiano himself, this wonder goal in truth comes after a run of disappointing free-kicks however all is now forgiven. This came after he showed a lot of composure in the first half, dispelling doubts following recent misses to score a vital penalty that helped to open the door for United into the last eight of the Carabao Cup.

Anthony Martial (on for Lindelof) – 66

Andreas Pereira (on for Lingard) – 66