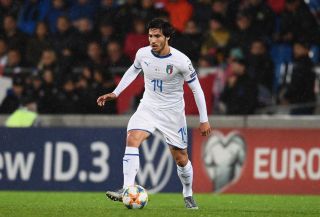 The 19-year-old is currently one of the most highly-rated midfielders in Europe and at such a young age has already made 61 Serie A appearances for Brescia.

United are in the market for midfielders are losing Ander Herrera and Marouane Fellaini and replacing neither — all since Solskjaer was given the managerial job.

And, Paul Pogba’s future is constantly up in the air, so there’s a good possibility that he will leave the club next summer.

Apparently United’s Italy-based scouting network believe they’ve found a solution in Tonali, as per The Sun.

But considering Tonali is one of the hottest prospects in Italy right now, United will have a fight on their hands to secure his signature.

The Metro has even drawn comparisons from the deep-lying playmaker with Andrea Pirlo and Jorginho. Unlike the Chelsea midfielder though, Tonali this season is adding goals to his game which makes him sound more promising than before.

The Red Devils need to add creativity in midfield because that’s the biggest problem I see when we have the ball. How many goals could we expect from Marcus Rashford and Anthony Martial if there was better service from behind?