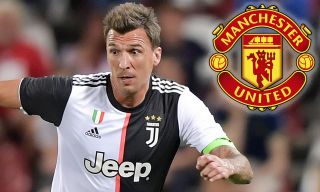 Man Utd are reportedly edging closer to an agreement to snap up Juventus striker Mario Mandzukic in a £10 million swoop.

After allowing both Romelu Lukaku and Alexis Sanchez leave in this past summer, Ole Gunnar Solskjaer has left himself light up top and he needs to bring someone in to fix the goalscoring situation.

Manchester United have managed just 13 goals in 10 Premier League games so far this season, well below the amount we should be scoring, but Anthony Martial has had his injury troubles. His return to team has helped United score more goals though.

Marcus Rashford came in for some criticism, though. The England international wasn’t providing the goals whilst Martial was out and that put Solskjaer in an unwanted position.

READ MORE: Cristiano Ronaldo explains how he became a superstar at Man Utd

In turn, the manager will surely want to bolster his attacking options in the January transfer window. And, out of all the players United are linked with at the moment, Mandzukic seems most gettable.

As reported by The Sun, via Tuttomercatoweb, it sounds like United are getting closer to a deal for the Croatian. Juve are said to be demanding £10m to give the transfer a green light.

Mandzukic has not featured for the Serie A champions under Maurizio Sarri, so it would be a huge surprise if the striker doesn’t switch clubs in the winter.

While it would be a short-term investment, United could do a lot worse than Mandzukic!