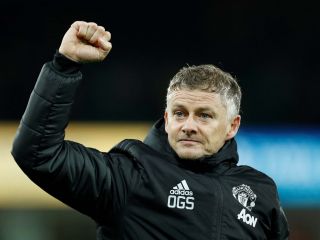 Man Utd take on Chelsea in the Carabao Cup fourth round tonight when they seek a place in the quarter-finals.

Ole Gunnar Solskjaer has named his starting XI for the game and it comes with little surprise that Sergio Romero will replace David de Gea in goal.

It’s a back-three again consisting of Lindelof, Maguire and Rojo — whilst Jones makes the bench.

Brandon Williams starts again at left-wing-back and mainstay Aaron Wan-Bissaka operates on the opposite flank.

READ MORE: How to watch Chelsea vs Man Utd online and on TV

That leaves McTominay, Fred and Lingard in midfield playing in behind James and Rashford.

Taking a look at last night’s results in the Carabao Cup there is a one-in-four chance of us getting a League One or lower side in the quarter-finals, and the draw takes place tonight after the game.

After a poor start to the season, Solskjaer should be under no impression he can take tonight lightly, even if the Premier League is his biggest concern at the moment. Chelsea have been very good with Frank Lampard blooding youth for the future, a smilingly similar philosophy to our manager.