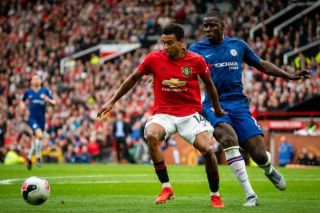 Chelsea are looking for revenge as they face Man Utd for a place in the quarter-finals of the Carabao Cup.

Frank Lampard’s introduction to Premier League football as a manager saw United hammer the Blues 4-0 at Old Trafford on the opening day of the season. Nobody is expecting the same this time around, with Chelsea at home and showing much better form than the Red Devils.

However, the recent weeks have been slightly kinder too Ole Gunnar Solskjaer’s side, since becoming the first team in the league to take points from PL leaders Liverpool.

READ MORE: Chelsea fan: Drop off expected under Lampard, but ‘not as badly as United’ under Solskjaer

Two consecutive wins on the road — Partizan Belgrade and Norwich City — should give the lads a boost going into this cup tie, but fans shouldn’t get ahead of themselves just yet.

Keep in mind for tonight’s game that a draw after 90 minutes will see the game go directly to penalties, which could make it a nervy night in London.

When does it start?

How can I watch it?

The match will be shown live on Sky Sports Main Event (coverage begins at 7.30pm).

If you are a Sky customer, you can also watch the match via the Sky Go app which acts as an online player.

This is shaping up to be a tight game, with both sides set to rotate with young and fringe players seeking opportunities to make their mark. Our prediction is United to win late on, 2-1, to avoid another penalty shootout.