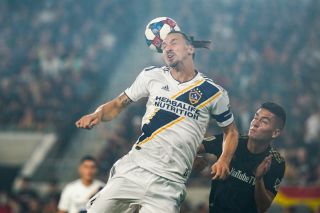 Former Man Utd striker Zlatan Ibrahimovic has hinted he will return to Spain following his 18-month spell with LA Galaxy.

The Swede left Old Trafford for the States in 2018 but the Galaxy’s 5-3 defeat to rivals LAFC in the play-offs last week is expected to be his final appearance for the club.

The 38-year-old is not yet ready to return and he seemed confident back in September that he still has what it takes to play up front for Manchester United.

It doesn’t seem like that will happen, though United have been lacking in the goals department this season — 13 goals in 10 league games. Instead Ole Gunnar Solskjaer is likely to find another alternative, preferring a younger striker.

Ibrahimovic released a video on social media today in which he claimed he will return to Spain.

Of course, Ibrahimovic wouldn’t make his next move without some drama. Here he teases a number of La Liga club supporters who, for the most part, will hope the former Barcelona frontman is about to join their club.

At Barca, Ibrahimovic clashed with Pep Guardiola, who he later accused of ‘treating a Ferrari like a Fiat’ during his time at the Camp Nou.

He later left the Catalan giants for Milan on loan before moving to the San Siro permanently.

Given his age — and the knee injury that resulted in his Man Utd departure — United fans are likely to understand why Solskjaer is not going back in for Ibrahimovic.