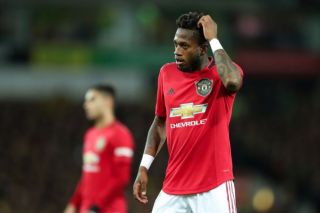 Ole Gunnar Solskjaer has this afternoon revealed that Fred looks set to take the place of injured Paul Pogba in his side’s midfield ‘for a while now.’

Man Utd travel to Stamford Bridge tomorrow night, for the biggest fixture in the Carabao Cup fourth round.

If it wasn’t for a successful penalty shootout against Rochdale in the last round, Manchester United would be knocked out of the League Cup, so we qualified by the skin of our teeth against a terrible side.

However, Solskjaer’s men have looked improved of late — 2 wins and a draw from three outings.

In our most recent outing, a 3-1 win over Norwich City, United took three points from an away fixture in the Premier League since February.

Goals from Scott McTominay, Marcus Rashford and Anthony Martial saw United come away with a victory that took the Red Devils to 7th in the league.

Some news that we can only describe as unwelcome involves Pogba, who is unlikely to return before December.

“He needs time to fully recover,” Solskjaer said when asked about the Frenchman, as quoted by Goal.com.

The Norwegian went on to explain how he expects Fred to fill Pogba’s void, saying, “Fred will probably take Paul’s position for a while now. There’s no use talking about [someone] who’s not going to be here for a long, long time. He’s not going to come on the pitch and help us until he’s fit.”

Solskjaer adds that he expected Fred to step up. We also think it’s a clear message to Andreas Pereira.

“Paul’s been brilliant and he is a creative midfielder that we need, but then it is up to others to step up.”