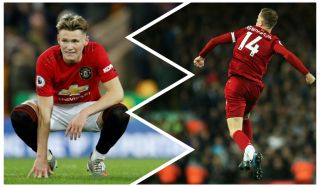 McTominay has been a constant presence in the Manchester United midfield this season. With Paul Pogba out with another injury, the Scotland international has taken more responsibility to keep things ticking in midfield.

He was voted MOTM by United fans for his performance in the 3-1 win over Norwich City on Sunday.

Rae, who played for Sunderland, Wolves and Rangers, believes McTominay is similar to Henderson and will keep growing in his position.

Speaking on the Ladbrokes Social Club, as seen in the video below, Rae said: “You look at the modern-day, you look at Henderson at Liverpool — he has at that stature.

“With Scotland, it is a totally different thing. He still needs to find his feet and dominate games.

“But if he plays the that he does at Manchester United, he will grow in stature.

“You then grow into a position and when you are doing it at one of the biggest clubs in the world you get that belief.

McTominay became a first-teamer at United under José Mourinho, who spotted a talent in the midfielder, and now under Ole Gunnar Solskjaer he is getting regular game time.

Having a player like McTominay in the squad is truly beneficial to any side. He can play in midfield and defence and Solskjaer has already made use of his versatility.

But it looks like his future is in midfield.

Moreover, I believe McTominay should set his objectives higher than Henderson in terms of reaching full potential.

This season, with all the obstacles standing in United’s way, could be huge for McTominay’s development. He’s getting games now but we must be realistic. The Red Devils need to go into the transfer market to strengthen their midfield.