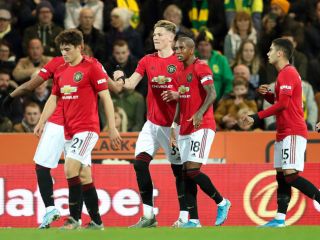 The doom and gloom surrounding Man Utd has finally lifted, albeit only slightly, after a convincing victory away at Norwich. The three points were arguably secondary though, as the fluid and entertaining performance took center stage in a season that has lacked any real spark.

The 3-1 win at Carrow Road marked a third good result in a row, with the draw against runaway leaders Liverpool being followed up by a first away win since Paris Saint-Germain in March, away at Partizan Belgrade on Thursday.

The goals from Scott McTominay, Marcus Rashford and Anthony Martial ended United’s worst away run in the league since 1989. A struggling Norwich side may have been perfect opponents to expel this unwanted record, but it should not be forgotten the Canaries defeated Guardiola’s City on the same ground just a few weeks prior. “This had been a good week for us,” Solskjaer said. “It started with a decent performance against Liverpool and now two wins away from home. It gives the players confidence and momentum.” The boss will be hopeful that his side can build on the jubilant mood within the squad with a run of winnable fixtures approaching. Coming up in the Premier League the Old Trafford team face Bournemouth, Brighton and Sheffield United, and although all those sides pose a threat, with respect, United should be picking up at least seven points from those fixtures if they have top four aspirations this year.

Perhaps the only blot on United’s copy book on Sunday, despite the late consolation goal scored by Norwich, was Rashford and Martial’s penalty misses. It now means that Man Utd have failed to score four of their last six spot kicks. Despite the disappointment the young forwards showed their talent and mental strength to find the net with two delightful goals later in the match. United have lacked that creativity and cutting edge in the final third this season, often finding it hard to break teams down and create chances.

Remarkably it was the first time since the 4-0 victory over Chelsea on the opening day of the campaign that United have found the back of the net more than once in a game all season, in all competitions. Crucial to that fact appears to be the return of Anthony Martial. His true importance to this side was revealed after the game as it was disclosed that since Ole Gunnar Solskjaer was appointed Manchester United manager, the win ratio with the Frenchman in the starting XI is 77%, dropping dramatically to 22% when the former Monaco man is absent. It is not just his goals that United miss, but his all-round game. He allows Rashford to play out wide, a position he seems more comfortable and productive in, and adds pace to the front-line.

Rashford and Martial’s linkup play all game, especially for the third goal, was extremely impressive and reminiscent of great United strikers of old. Martial’s involvement also allows Andreas Periera to play centrally, rather than on the right, and the Brazilian appears to be the best creative player in United’s ranks currently.

The significance of the French international has not gone unnoticed on Ole’s side either as he stated after the game, “We have missed Anthony, he is a very important player for us, the way we play and today Marcus Rashford was excellent down the sides and in the middle. A great response to missing the penalty, chasing back and scoring. The third was a very good goal and a class finish. It is great for Martial to score a goal like that. We could and should have scored a few more goals.” The victory and performance indicate progress is being made at United by Ole and his staff and should restore some confidence to those United fans who were starting to lose faith.

Although yes, it is only Norwich, and yes, it is only one victory, but it is an indication of what is possible with the right players available. If Ole can keep the back-line fit and get Shaw back to his best, or even integrate the promising Williams, alongside the protection McTominay offers at the base of the midfield, United have a great, solid foundation from which the likes of Rashford, Martial and Dan James can attack from. The stability in the defensive third should allow the electric front three freedom to showcase their talent. Whilst Solskjaer will still need a couple of transfer windows to really turn this side around, Sunday’s victory should be a reminder that this is a team in transition but moving in the right direction.

There will be ups and downs this season, but the three points earnt at the weekend catapult the Red Devils up the seventh in the table, and with Spurs and Arsenal continuing to struggle, the fight for fourth is still on. It is important not to get carried away, Solskjaer still has a lot to prove as a manager and the jury is still out on a host of players, but Sunday was a big plus in a season full of negatives. Ole and his players now need to carry on exciting and entertaining the fans, scoring goals and getting good results as the chance to build some real momentum starts on Wednesday. A visit to Stamford Bridge in the League cup may be a tough ask for Solskjaers youngsters but Lampard will also rest some key players. A good performance and a few goals would probably satisfy most United supporters, with the return visit of Partizan Belgrade and trip to Astana being sandwiched between the aforementioned favorable league fixtures. Now is the time for Man Utd to step up and show the progress they have made, the next few weeks could be crucial to their season and Solskjaer’s future.