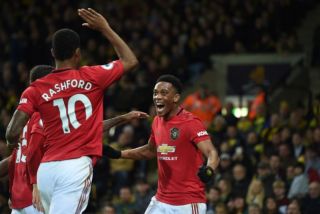 Manchester United got back to winning ways in the Premier League at the weekend. A convicting 3-1 win over Norwich should give everyone a lift at the club, even though two penalties were missed during the game and the Reds should have won by a greater margin than two goals.

Here are five observations we took from the game:

Whether it’s playing as a wing-back, or being deployed as a more auxiliary full back, Aaron Wan-Bissaka continues to go from strength to strength. He won 11 tackles at Carrow Road, more than any other player in a Premier League game so far this season. He also linked well with Daniel James going forward, and was tireless in chasing down seemingly lost causes. Just when Norwich players thought they may have gotten the better of, or gone past him, he managed to smuggle the ball to safety. His anticipation and reading of defensive situations was particularly clear during a potential Norwich counter-attack in the second half, when he allowed the attacking player to advance just over the half way line before timing his tackle to perfection and snuffing out any potential threat. One of the real unmitigated success stories of United’s season so far.

McTominay and Fred provide a solid midfield base

Perhaps to the surprise of some United fans, Scott McTominay is developing into a midfield mainstay under Ole Gunnar Solskjaer. His energy and mobility are a stark contrast to the ageing Nemanja Matic, and the fact that he is now popping up with the odd goal only serves to underline his continued progress. Despite being depicted as a midfield workhorse, and someone who was only promoted to the first-team because of his physical stature, his increased assurance on the ball should not go unnoticed either – despite being caught out for Norwich’s late consolation goal. Allied to that, Fred perhaps put in his best United display to date. His main strength lies in breaking up opposition play, and that was key in providing the platform for many of United’s attacks. This was also one of his better games on the ball, with not too many misplaced passes going astray. Though, you should probably expect that as a minimum from someone costing £52 million. This was United’s best away display since that night in Paris, when the same two players shielded the back four. Coincidence? Maybe, but with Paul Pogba’s injury absence likely to extend until at least December , keeping both fit will be vital in upcoming games.

Although he scored the winning penalty away at Partizan in the Europa League, Anthony Martial looked lacking in match fitness and a tad disinterested – even coming in for some veiled criticism for the manager for his lack of pressing. However, when on form he provides something that Marcus Rashford simply can’t in the centre forward role. Prior to sustaining a thigh injury against Crystal Palace, his link up play and ability to play with his back to goal were key to United’s attacking play in the first 3 league games (see the penalties won against Wolves and Palace)- and so it proved at Carrow Road. His return to fitness provided an attacking focal point, and also allowed Rashford to provide a constant threat down the left wing. The link up between the two was no more evident than in United’s third goal, where Rashford’s clever back-heel set up Martial’s dink over Tim Krul. A fit and firing Martial is integral to any attacking fluency.

With the increased discussion around ‘Expected Goals’, or (‘xG’) in recent years, it’s fair to assume most professional footballers are more likely than not to score from 12 yards out. However, whether it be Paul Pogba, Marcus Rashford or Anthony Martial – United have only converted 2 of the 6 penalties awarded in the Premier League this season. A truly shocking statistic, and one which will be sure to play on the mind of whoever steps up for the next one. Though we weren’t made to pay for both misses on this occasion, if the penalty profligacy continues – better teams, whose style of play doesn’t aid United, are likely to capitalise.

Two away wins and a home draw against Liverpool represents progress for Ole Gunnar Solskjaer, particularly following the doom and gloom of the defeat at Newcastle before the international break. The 3-1 victory also ended United’s hoodoo of not scoring more than one goal in a game since the 4-0 Chelsea win on opening day. Norwich’s openness played into United’s hands, as evidenced by being caught high up the pitch for United’s second goal – but three points here were essential in backing up last week’s point at home to the league leaders. Wednesday’s Carabao Cup tie at Chelsea will likely see the likes of Mason Greenwood, Brandon Williams and James Garner start, before United travel to Bournemouth for next Saturday’s early kick off. This win, particularly the manner of it , will hopefully provide the momentum needed for United to kick on in the weeks to come.