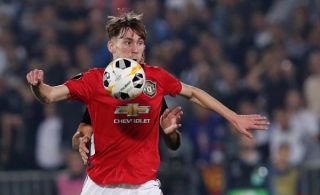 Following a narrow win against Partizan with a commanding display against Norwich that could have easily seen Man Utd double their three strikes, Ole Gunnar Solskjaer will happily carry some confidence into the Red Devils’ next encounter. However, given a tough matchup against a fit and firing Chelsea side, United will have to be at their best if they wish to progress to the next round of the League Cup.

An emergence of younger players has seen United’s abilities in certain areas of the pitch slowly grow throughout the season, as the likes of Axel Tuanzebe and Mason Greenwood added freshness to United’s squad depth and the likes of James Garner and Brandon Williams look likely to follow suit and replace ageing members of Solskjaer’s core.

The four could all start against Chelsea and are likely to be joined by a mix of first-team players and more experienced fringe players, in a side that is far from certain but is likely to resemble the following:

David de Gea has done his part and more in the Premier League, but the cup games represent a solid opportunity for Sergio Romero to step in and maintain his match sharpness in case De Gea picks up an injury or suspension at any point.

Wan-Bissaka was forced to put in a shift against Partizan after Diogo Dalot’s absence compounded Ashley Young’s move to left-back to cover for Luke Shaw. Then, he put forward another stunning display against Norwich, proving once again that he is quickly becoming an influential player for United. Now, unfortunately, he will not be afforded a rest as he must play again to make up the numbers.

One of the bright spots of United’s season thus far, the emergence of Axel Tuanzebe has added consistency to United’s reserve ranks in defence and ended the prominence of the likes of Phil Jones in Solskjaer’s defence. After failing to return against Norwich, it is hoped that Tuanzebe will be restored in United’s back line against Chelsea.

The long-term absence of Eric Bailly has allowed Rojo to quietly emerge as the fourth option at the back for United, and now lined him up for a start against Chelsea. Despite the inconsistency and rash decision-making that has defined many spells of his career, he remains a half-decent defender at his best and consistently proves less of a calamity than Phil Jones.

Also emerging from United’s youth ranks, it was Shaw’s injury that allowed Williams to enter the side and impress with his energetic and tactically solid displays. He looks likely to usurp Young as the side’s best option at left-back in the absence of mainstay Shaw and would have been quietly confident about starting this game having seen Young’s inclusion against Norwich.

While Paul Pogba’s injury has forced McTominay into playing many more matches than ideal, it is a near certainty that the Scottish central midfielder will not be removed from United’s lineup any time soon. The controversial Frenchman aside, McTominay is the only United player to prove his credentials as a top-half Premier League midfielder on a consistent basis, and thus must start by default.

Entering the fray in the 90th minute against Norwich, James Garner proved that, behind the injured Pogba, and McTominay and Fred, he is possibly the next central midfielder in the pecking order for United now. Starting the 18-year-old against Chelsea may be a step too far for Ole Gunnar Solskjaer but given the importance of rising up the Premier League table, Solskjaer may bite the bullet and persist with Garner.

Count Mason Greenwood in for the Chelsea match. It seems highly unlikely that Solskjaer will persist with all of Anthony Martial, Daniel James and Marcus Rashford, especially given that they are finally all fit to play together in the Premier League. He doesn’t need to, either, with Greenwood providing more than enough quality to trouble whomever may start at left-back for Chelsea.

Andreas Pereira’s heavy accumulation of minutes makes it highly likely that Juan Mata will start instead against Chelsea. While currently, Mata is a far cry from the player that tore defences apart with his movement in his prime, he is a good player to hold United together in the centre of the park, and give rest to Pereira, who has become more prominent figure in Solskjaer’s setup over recent weeks after a series of gritty displays.

Given that Rashford was afforded a rest against Partizan, it is likely that he will start in this match instead, especially after scoring a brace against Chelsea in the season opener. Rashford is slowly gearing back into form and has clearly benefitted from playing off Martial this season.

Given the obvious impact Martial’s introduction had on United’s build-up play against Norwich, it seems he simply must play if United are to have any chance of mustering a good performance against Chelsea. Rashford, too, could play, but he seems much more suited to playing on the left-wing and feeding off a main striker, which opens the door for Martial to continue to cement his place as Solskjaer’s main forward.