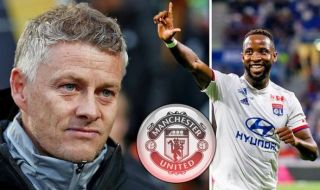 Man Utd have reportedly been handed a boost in their rumoured pursuit of Lyon striker Moussa Dembele.

The Red Devils need to strengthen up front at the next possible opportunity, which is in the January transfer window, but that also comes down to whether Lyon would sell the French striker midway through the season.

The question for us now is: Is Dembele much of an upgrade on Marcus Rashford and Anthony Martial?

According to ESPN, Dembele is among Manchester United’s main targets and they’ve been given some good news on that front as the Frenchman is said to fancy a move to the Premier League.

The 23-year-old has also been linked with Everton, as per The Sun, with the former Fulham and Celtic striker valued at £40 million.

Dembele’s goal tally in Ligue 1 this season has been impressive — 7 goals in 10 appearances (via WhoScored) — and last season he netted 15 times. There’s a player worth keeping an eye on.

On Ole’s say so, and not Woodwards…you’ll be glad to hear.#MUFC

At that price, United could be getting a very good deal for a goalscorer. The ESPN report, however, does state that their star attacker is not currently for sale.

This is more than likely one to watch out for in the summer.