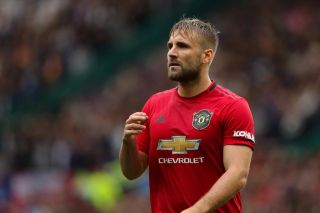 The thorny subject of how many more Man Utd players will fall victim to Ole Gunnar Solskjaer’s rebuild attempt will be a constant raging discussion for United fans all over the world.

Solskjaer has started to wield the axe, with the likes of Darmian, Lukaku, Herrera, Valencia, Sanchez and Smalling all shown the door either permanently or temporarily. We can all appreciate that the chopping should not suddenly be curtailed – Manchester United will need to continue to be ruthless and clinical in their judgement of whose time is up, their level has been reached.

It might appear somewhat harsh, but the possibility of Luke Shaw’s name cropping up on the list of expendables cannot totally be dismissed. Harsh in that he was named player of the year as recently as six months ago. That was a year that can only be described, kindly, as undistinguished, below expectations and forgettable. More forthrightly, it was a horror show and an indicator as to how far United have nosedived under their bitterest foes.

Truthfully, Luke Shaw has not kicked on as initially envisaged when Louis van Gaal authorised his signing in 2014. His savage injury, inflicted by Hector Moreno in Eindhoven, was well documented and naturally set his career back when he was on the cusp of making great strides, but in equal measure up and down form and questionable fitness records have blotted his copybook.

From run ins with Jose Mourinho to returning to the treatment room to this current day, Shaw has astonishingly chalked up as many absences as he has first team appearances for the club: His absence from the team against Norwich City at the weekend was his 105th compared to 109 first team appearances. Frankly, can anyone categorise him as reliable having been made aware of that fact? Injuries are, of course, an occupational hazard for any professional sportsman, but there can be little disputing that if Shaw had a cleaner bill of health, he would probably be England’s regular left-back and this article would have been ridiculed as slander.

His winning over Mourinho led to a new contract being signed and he consolidated this form under Solskjaer but we have seen that contracts mean nothing these days- just ask Harry Maguire, Alexis Sanchez and Chris Smalling.

The recent emergence of Brandon Williams, including flourishing the hostilities Belgrade typically offer, appears to have afforded Solskjaer another option at left-back, which is perhaps hyperbolised and embellished when the alternatives are Ashley Young and Marcos Rojo. Williams may well turn into Borthwick-Jackson mark II, but his promotion has been warming and he has held his own so far.

Not only that, but it is clear that United have a vision and strategy in the transfer market to pinpoint young, hungry and ambitious players. It is a strategy that has reaped huge rewards so far – Aaron Wan-Bissaka, Harry Maguire and Daniel James have all excelled and rose to the challenge.

So it is not beyond the realms of possibility that Leicester’s Ben Chilwell will be being watched incredibly intently by United’s scouting team. Chilwell is younger than Shaw, thriving in a Leicester team full of scoring and attacking intent and is a symbol of reliability- seldom missing a game having ousted their title winning left-back Christian Fuchs.

Many will appreciate the complexity of trying to swoop for Chilwell at the earliest opportunity, Leicester will have rightful ambitions of gatecrashing the top four and they will likely be instantly dismissive of any mid-season approach- particularly with United looking to make up ground after a calamitous start to the league season.

It is an irrefutable fact though that Chilwell fits the bill in terms of the player profile United are longing for in their quest to get back to the upper echelons of the league- homegrown, young and ambitious. Him and James Maddison, another reported and welcome United target are well known friends with Harry Maguire, which could work in our favour down the line.

There is a player somewhere in Luke Shaw but it saddens many to say the jury is still out when he arguably should have made the left-back position his own at this stage. He still has time on his side, but many would respond he has had ample opportunities to cement his spot.

Sometimes you have to be cold and ruthless to see the bigger picture, and perhaps it remains to be seen whether Luke Shaw is still part of that picture.