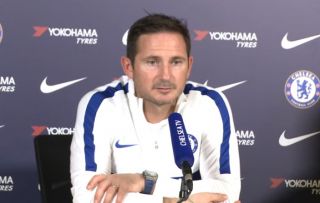 Chelsea are preparing to host Man Utd in the Carabao Cup on Wednesday night.

The Blues will be looking for revenge after suffering a 4-0 defeat to Manchester United earlier this season.

Kick-off is at 8.05pm and we’re expecting a tough battle for Ole Gunnar Solskjaer’s men.

Chelsea have turned their season around since losing to United on the opening day of the season. They have won the last 7 games in a row across all competitions, so confidence will be high.

Frank Lampard has been providing the latest Chelsea team news in his pre-match press conference today.

Both sides could field youngsters and fringe players — given it’s the League Cup — though Solskjaer could do with winning silverware in his first full season in charge!

Lampard has confirmed that the game will be chance for those who aren’t playing as regularly.

As reported by Goal’s Chelsea correspondent Nizaar Kinsella, Lampard said: “This game may be an opportunity for players who are not playing. This is not to do with age.

“Kante and Rudiger both not ready to play versus United though.

“I did want to play every game. The beautify of seeing it on this side is you see it differently and see the bigger picture. You have to see the demand on the players.

“I will make changes.”

We are seven points adrift which is quite a jump considered we’re only in October.