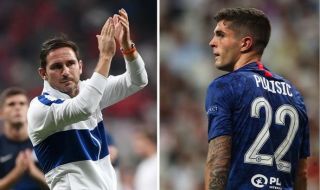 Chelsea manger Frank Lampard has been speaking to the press ahead of their Carabao Cup match against Man Utd on Wednesday night.

The Blues host Manchester United at Stamford Bridge in the 8.05 kick-off tomorrow night and will be hoping to get payback on Ole Gunnar Solskjaer’s side after losing to the Red Devils in a 4-0 hammering on the opening day of the season.

Lampard has already admitted there will be changes to the side that beat Burnley 4-2 at the weekend.

That means some of the fringe and young players might be in for starts, giving the young manager a chance to rest some player for the Premier League and Champions League.

The two players who have been on the fringes so far this season at Stamford Bridge is Michy Batshuayi and Christian Pulisic. And, much to Lampard’s delight, the pair have been making a great impact from the bench in recent matches.

Lampard described both players as being ‘game changers’ and very important to the team.

Lampard on bench players impact: “There is nothing better for me recently than subs helping us play well. Pulisic and Kovacic vs Newcastle. Pulisic and Batshuayi vs Ajax.” He calls them game changers. #CFC #MUFC