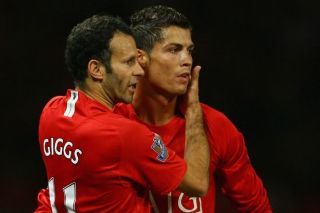 Cristiano Ronaldo says he would have been an “imbecile” not to have learned off his ex-Man Utd teammates such as Ryan Giggs and Paul Scholes.

The Portuguese superstar, who spent six-years playing for Manchester United, has won five Ballon d’Or titles and as many Champions League in an incredible career.

Along with Barcelona’s Lionel Messi, this generation of football fans have been blessed to have witnessed two juggernauts in the football world. Arguably the greatest duo to play the beautiful game.

Ronaldo explains how studying his teammates at Old Trafford helped him become of the game’s all-time greats. His goalscoring tally increased dramatically in his final three seasons at the club.

When asked how he became a prolific forward in his time at United, Ronaldo told France Football: “By using my brain. If you’ve got a little intelligence, you look and take example from those who are doing things better than you.

“What’s what I did when I was in Manchester with Ryan Giggs, Paul Scholes, Ruud van Nistelrooy, Rio Ferdinand… if you don’t learn from guys like that, you’re an imbecile.

“The goal isn’t to imitate but to take aspects from those who are the best and adapt it to your own personality. That’s what I did. I had some talent and I watched them.

“Sir Alex Ferguson also taught me a lot, and I realised I had the potential to score, not only dribble and pass. I started to think of being a complete player without any weakness. I could score with my right foot, my left foot and my head, I’m strong and I’m quick.

“If you have this and a real ethic and a good lifestyle, you can still do it at 34-and-a-half.”

We are all very proud to have watched Ronaldo blossom into one of the best ever players.

Signed from Sporting Lisbon, Sir Alex Ferguson proved he had an eye for talent by unearthing a youngster who would go on to win everything.

The young players these days don’t have quite the same influences around them.