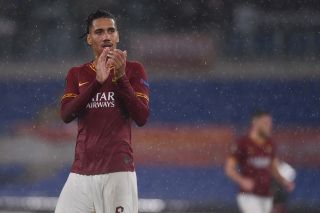 Ole Gunnar Solskjaer decided to offload the England international because he was surplus to requirements. But Smalling left on loan which suggests his Manchester United career may not be over just yet.

Though, many fans believed at the time that no-one would buy him permanently. Then it was a matter of hoping he’d do enough in Italy to be bought by another club — maybe Roma — next summer.

However, it doesn’t quite like that’s the case with Smalling now impressing with the Serie A outfit.

The centre-back was involved in a penalty claim scandal last week in the Europa League, when Borussia Monchengladbach won a late penalty to equalise against Roma. The ball hit Smalling into the face and the referee blew for handball…

Monchengladbach couldn’t help themselves but poke fun at the penalty call afterwards.

There’s every chance Smalling will return to feature under Solskjaer again.

According to Sky Sports, despite speculation over Roma’s desire to sign Smalling permanently, no such talks have been held and he’s expected back at Old Trafford.

Harry Maguire and Victor Lindelof are the current defensive duo at Old Trafford, with Axel Tuanzebe out injured and seen as third choice.

And, with Eric Bailly out nursing a long-term injury, Marcos Rojo is getting game time despite almost leaving on deadline day. It helps that the Argentine is versatile and play in more than one position/

Phil Jones’ days are numbered it would seem.