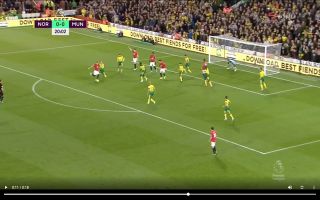 Scott McTominay has fired Manchester United into the lead against Norwich City with a stunning finish in the 21st minute of today’s clash.

Andreas Pereira fired a dangerous cross into the box from the right-wing and after it wasn’t dealt with, McTominay wrestled the ball of Todd Cantwell before firing a lovey first-time finish into the back of the net.

McTominay has been one of our best players so far this season, if the ace can add goals to his game he’ll become one of the league’s best in his position.

Take a look at our opener below:

The Goal of Scott McTominay for Manchester United in video! 🎥#NORMUN #MUFC 🔴 pic.twitter.com/tPd53v6YWK

Great strike by the Scotsman.