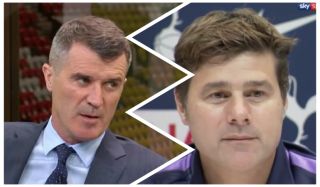 Tottenham manager Mauricio Pochettino is probably getting sick and tired of answering Manchester United related questions this past year since being heavily linked with the manager’s job following José Mourinho’s sacking.

This time around, the Argentine was asked about Roy Keane’s recent comments on Harry Kane, and it appears as though he was surprisingly relaxed about it.

As seen in the video below, the former United midfielder insisted that a simple solution for his old club to fix their goalscoring problems would be to just go and sign Kane — but everyone knows it wouldn’t be as easy as that.

Keane never beats around the bush — he’s straight to the point and makes for excellent television whenever on Sky Sports or previously ITV.

Gary Neville accompanied Keane in the Sky Sports studio last weekend and insisted that he probably wouldn’t be too popular with Spurs fans for making a comment like that on their star player.

Roy Keane is just brilliant. ‘What are you all staring at??’ #MUFC pic.twitter.com/xCIZ1Csmfm

Pochettino did not seem a bit fazed by Keane’s comments and agreed with the Irishman that the striker and agreed that he deserves to enjoy success and win trophies. Ultimately, though, Poch will hope that happens at Tottenham — or with England — for as long as he’s at White Heart Lane.

The Spurs boss seems relaxed about the situation and praised Keane as an individual that he respects both from his playing days and now as a football pundit.

Should United target Kane, however unlikely we are to get him, that relaxed mood we’re now seeing could change quickly.

“Every time I listen to him, he is very clinical in his comments and he loves the good players.”