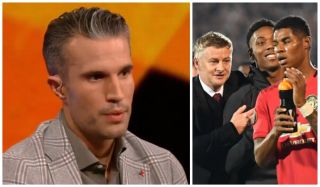 Robin van Persie was not impressed with Manchester United on Thursday night.

Even though the Red Devils beat Partizan Belgrade 1-0, the club’s former striker rightly criticised the performance because Ole Gunnar Solskjaer’s side failed to register a shot on target from open play.

The Dutchman said it was “not good enough” with the only goal from the goal, scored by Anthony Martial, coming from a first half penalty kick.

“Yeah, that’s not good enough to be really honest to have one shot on target, which is the penalty,” Van Persie told BT Sport, as quoted by the Daily Express.

“In the second half Partizan had three good chances and Manchester United, for me, it’s just not good enough, they have to offer more.”

Our approach to the game was slightly different to Sunday, especially in the first half, as United tried to take control of the game.

Then in the second half Partizan forced us to defend deep, but Solskjaer’s men still ended their horrible away run of not winning a game on the road since March.

But despite that, Van Persie says the performance against the Serbian side proves things are not improving under the Norwegian manager.

He — very much like the rest of us — wants to see more from our attacking players.

“No it’s not improving, not at all, if I’m really honest,” Van Persie added.

“I want them to play well but if you look at the second half [Marcus] Rashford looked lively but they didn’t create anything.

“If you win 1-0 against Partizan that’s a good result but you want to see the forward players close them down, put them under pressure, try to play positive.

“With those little things, I just don’t see it.

“It can go wrong, they can fail, they can miss chances, it doesn’t matter, that is football.

“But at least try to play more positive and more attacking.”

United travel to Norwich this weekend in hope of another away win, but if will be found out unless they find a way to put away lesser teams.

That has been the story of our season thus far.