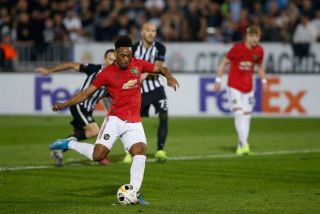 Tifo Football have done a feature on why Manchester United struggle to score from open play.

It has been an issue for Ole Gunnar Solskjaer’s team since the departure of Romelu Lukaku, although most United fans accepted that it was time for the Belgian to leave the club in the summer.

There’s absolutely no point keeping a player who doesn’t want to be at the club — and it was clear from the moment Solskjaer came in that Lukaku did not suit the system the Norwegian wants his side to play.

In Solskjaer’s first 12 games as United boss, the Red Devils went unbeaten, racking up a goal difference of +20, though Timo Football explain that there was something unconvincing about United’s expected goal return.

There was even an argument put forward that Solskjaer, a goalscorer during his time playing for United, could improve Marcus Rashford’s composure in front of goal.

That did seem to be the case from the beginning, now fairly seen as the honeymoon period, however, the England international failed to fill the void left by Lukaku — and Martial while the Frenchman was out injured for two months.

The video explains that United are the best side in the league defensively at the moment with the lowest xGA figure.

In this 12-minute video, influenced by a story that originally appeared in The Athletic, Tifo Football try explain why United have started performing worse in front of goal.

It is suggested that following last season’s 2-0 defeat against Manchester City, United’s cumulative goal difference under Solskjaer fell below the expected numbers.

We have yet to recover.