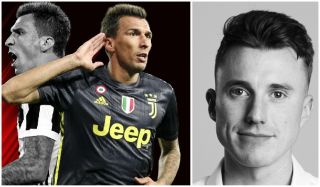 The Athletic has poached some of the top sports journalists in the UK for its coverage of the Premier League.

Stretty News spoke with The Athletic’s Manchester United correspondent Laurie Whitwell (@lauriewhitwell), formerly of the Daily Mail, to get some background thoughts on his work.

You were one of many top journalists to move to The Athletic over the summer. I’ve enjoyed your work on United thus far, which is why I asked you to answer some questions for Stretty News. Tell us more about Laurie Whitwell and how you ended up covering the Reds?

I’m not sure about ‘top’, but thank you. I grew up a United fan – first match was Arsenal at home in 95/96 when Cantona scored a beauty, lucky enough to be at the Nou Camp three years later – but have worked away from Manchester for the last 10 years.

I got on the graduate scheme at the Daily Mail, one of only a few left so should be cherished in my opinion, then worked in London initially before covering midlands football from 2014. So I got to write about Leicester’s title win, which was obviously insane. When The Athletic started though I got an opportunity to return home and report on the club I’ve known all my life, in a way that was fresh and deep. So it was a no-brainer really.

In terms of communication with press, how do United rate compared to other Premier League clubs?

I actually rate United very highly. I’ve got to know their press people and have found them good to talk to, decent at coming back to me on stories where possible, and open to interviews for features I’ve worked on, mainly about the academy. First-team players are, inevitably, harder to come by.

Yes absolutely. Clearly results are not good, but the performances feel close sparking on occasions. Newcastle was awful, but Liverpool was much better. Ed Woodward has gone on record as saying he will give patience for the changes that need to happen. Obviously there is always a caveat attached to that if United don’t start winning.

Do you see United being this close (two points off) or in the relegation zone come Christmas?

No, I really don’t. With Anthony Martial now back from injury, United will have more goals in them and I can see it turning.

In terms of player interviews, has anything funny or noteworthy happened when you’ve done work with United players?

I’ve only done a few with United’s younger players around their trip to Belgrade last year, which coincided with the commemoration of the Busby Babes on the 60th anniversary of Munich. I thought they all spoke really well on a difficult topic. I have also interviewed Louis Saha, and he was brave enough to get a lift with me in my car so I could extend our chat. He needed to get to the train station but I used those few minutes, scrambling with with iPhone voice-recorder, to get a final couple questions in.

Do you believe fans on social media can put pressure on the Glazer family or Ed Woodward?

If enough people join and target precisely then perhaps. But at present I don’t think it is penetrating too deeply.

Can we expected a top signing or two in January?

All noises are that United feel it is difficult to do business in January but they really have to make at least one signing, ideally two. As I have written I believe they will go back in for Mario Mandzukic and I think that could well happen. An inquiry over Christian Eriksen would also make sense. Spurs might decide to sell rather than lose him for nothing next summer, but it does depend on Real Madrid’s interest too.

And finally, why should our readers consider subscribing to The Athletic?

I think we offer a unique depth and breadth of coverage worth paying for. There is myself, Andy Mitten, Danny Taylor, Oliver Kay, and Adam Crafton all writing about United to different degrees. With one of our deals it can work out to about £2.49 per month. I am at every match, with Q+As immediately after, and will continue to put together pieces you won’t find anywhere else, primarily because reporters don’t have the same time. The piece on Ed Woodward took weeks to put together and ran to 5,500 words, but hopefully shone a light on him like never before. We’ll have exclusive interviews and stories too.

Subscribe for The Athletic here. We thoroughly recommend it.