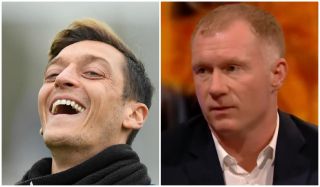 Paul Scholes has become the latest former Manchester United player to urge Ole Gunnar Solskjaer to sign a player from one of our Premier League rivals.

On Sunday, Roy Keane was sat in the Sky Sports studio tipping the Red Devils to launch a transfer pursuit of Tottenham Hotspur striker Harry Kane.

Solskjaer responded to Keane’s comments during Wednesday’s press conference in Belgrade, noting how outspoken the Irishman has always been and listed Kane as one of the best strikers in the world — along with Bayern Munich’s Robert Lewandowski.

However, Scholes was on BT Sport last night for their Europa League coverage of United’s 1-0 win over Partizan.

The former midfielder has suggested signing Arsenal playmaker Mesut Ozil may solve their problems, even if it’s just temporarily.

Ozil has struggled to win over Gunners’ boss Unai Emery and has made the headlines of late for being dropped multiple times.

You make me laugh… pic.twitter.com/DohUXm3oSH

As quoted by the Mirror, Scholes said: “I can’t understand it (Ozil’s omission).

“I think he’s a player who can link a team together. He’s got great quality, he’s shown that in his career.

“He could be the answer short-term.

“I don’t know, I think that would be up to him, whether he wants to take a (sic)

“I probably can’t (see it happening). I just think, short-term, he’s the sort of player United could do with.”

I could think of many less favourable options to come in and do a job on the short-term, which we’re going to need in January.

Ozil may be ageing and likely to demand high wages, so perhaps a loan deal would work best for United.

Though Arsenal will probably push to do a permanent deal instead.

The question must also be asked whether the Germany international would be willing to make the switch given the team’s woes so far this season.

United are currently 14th in the Premier League.