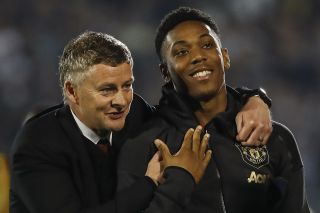 Manchester United travel to Carrow Road on Sunday to take on Norwich City in the Premier League.

The Red Devils are only three points ahead of Norwich, who sit second-bottom in the table after nine games, and manager Ole Gunnar Solskjaer hopes his players can build on their away win over Partizan Belgrade on Thursday.

Norwich have already beaten champions Manchester City at home this season and Solskjaer is anticipating a tough battle against the Canaries.

“I hope we are going to stop them because it’s always going to be difficult down at Carrow Road,” said the Norwegian, as quoted by Sky Sports.

“When I watched their first game against Liverpool I saw a team with lots of courage. They were brave, they played their own way and kept going.

“That has given them great results — they beat Newcastle, they beat Manchester City — and they’re a team with a clear philosophy.

“We are ready for it now, we’ve been to Belgrade here and got some players back. I managed to take off Aaron Wan-Bissaka and Anthony Martial off after 60 minutes because they’ve been out for a long time.

“So hopefully we’ll have a fresh team because we’ll need to be at our best to have a chance.”

Moyes used to get pummelled for stuff like this. Same energy needed.

No sounding very confident, Solskjaer compliments a side on being brave. He ought to demand his own players to approach games a similar way.

The squad is probably lacking in confidence after a poor start to the season, though, Thursday’s win in Belgrade should give them a boost as three points on Sunday are a must.

It will be interesting to see if United stick with a back-three. Solskjaer has opted for a trio in defence in our last two games against Liverpool and Partizan.

“The injuries put us into a position where the performances didn’t come,” Solskjaer added.

“We had fit centre-backs, quality centre-backs and it just made it easier to go to a back-three against Liverpool and again on Thursday.

“Jesse Lingard can play in that three in midfield and we’ve got players who have played in the formation. For example, Sergio Romero and Marcos Rojo have played a World Cup final in a back-three. Phil Jones and Harry Maguire were involved in a back-three in a semi-final.

“Injuries have made us go into this position but it’s working quite well.”

Anthony Martial, who spent two months out injured, started his first game since August on Thursday night. He scored a penalty in the 1-0 win over Partizan and Solskjaer is hopeful the Frenchman’s return will bring much needed goals to the team.

“But now Anthony is back, he got a goal on Thursday and I’m sure you will see us improve with him in the team because he does give us something different.”

The Reds will be without Paul Pogba, Luke Shaw, Diogo Dalot, Nemanja Matic and Axel Tuanzebe on Sunday. All players are out injured.

Norwich, on the other hand, halted a three-match losing streak last time out by drawing at Bournemouth and keeping a clean sheet.

After switching to a 4-5-1 system from their favoured 4-3-3, Norwich will take United’s lack of scoring into account and hope to close the game out. We are not expecting many goals from this one.