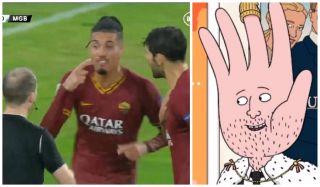 Chris Smalling gave away a stoppage time penalty as Roma conceded late on to draw with Bundesliga outfit Borussia Monchengladbach in the Europa League.

As you will see here, the Manchester United loanee was adjudged to have handled the ball — after it actually hit him in the face.

Smalling, who is on loan at Roma, jumped to defend a free-kick as the game reached the 94th minute.

His Roma teammates were left stunned and angered as Scottish referee Willie Callum awarded a penalty.

Roma had been leading 1-0 when the penalty was given, but Lars Stindl fired home from the spot-kick to draw the sides level.

And Monchengladbach were quick to troll Smalling afterwards, with the club’s Twitter account posting a graphic of a character with a hand for a head along with the caption: “Too soon?”

There is no VAR in the Europa League until the final. Second rate competition, eh? 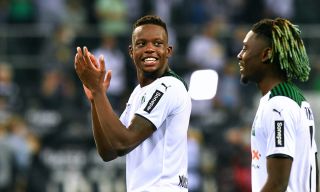