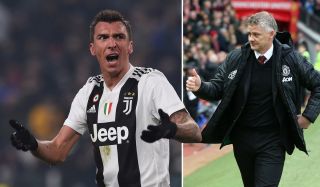 Juventus are looking to offload out of favour striker Mario Mandzukic in January.

The former Bayern Munich and Atletico Madrid frontman doesn’t fit into manager Maurizio Sarri’s plans and has yet to feature for the Bianconeri this season after being left out of their Champions League squad.

The former Croatia international has scored 30 goals in 117 appearances for the Italian champions, who currently boast some quality attacking players like Cristiano Ronaldo, Gonzalo Higuian and Paulo Dybala.

Juventus sporting director Fabio Paratici has reached that they have allowed Mandzukic to train with other sides as Juventus prepare for life without the striker.

In an interview with Sky Italy, Paratici spoke about the possibility of offloading Mandzukic:

“We are talking to Mandzukic to find the best possible solution,” he said. “We remain open to any scenario, so staying here or going elsewhere. We are discussing it to find the best solution for both parties.”

Sarri had earlier revealed in a press conference that the Croatian was not training with Juventus after making an arrangement with the club, as quoted by the Mirror.

“Mandzukic is not training with us, in agreement with the club. If the agreement changes, I am open to everything.”

The 33-year-old looks set to be targeted by United in January, as a cry for help to bring more goals to Solskjaer’s misfiring side.

Goal reported how much United are willing to pay for Mandzukic earlier in November.

Manchester United are closing in on the January signing of Mario Mandzukic and are confident a bid of €10m will be accepted by Juventus.

Mandzukic is expected to sign an 18-month contract until the summer of 2021, earning a salary of €5m a year.

“He’s not scored enough goals in the Premier League for Manchester United to hang their hat on him being the man that’s going to take them back to where they want.” 🎩

Is Marcus Rashford the right man to lead #MUFC?

We’ve been hampered by the lack of options up front following the departures of Romelu Lukaku and Alexis Sanchez in the summer.

Time will tell if that was a sacrifice worth taking by Solskjaer.