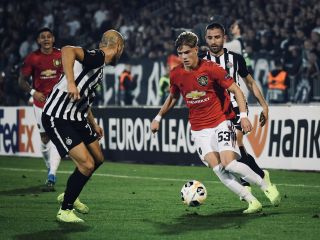 Manchester United are to face off against newly promoted Norwich City this weekend, at Carrow Road in what will be the first meeting between the two sides since 2017.

The Red Devils won that game 1-0 thanks to a goal by Juan Mata — but the Spaniard doesn’t make our predicted line-up this time round.

Norwich are just three points behind United in the Premier League, positioned second last, as Ole Gunnar Solskjaer hopes his side win a consecutive game on the road.

And with the game at Carrow Road, it’s important we don’t underestimate our opposition.

David de Gea missed Thursday night’s 1-0 win over Partizan Belgrade but will definitely return between the sticks, and will likely have a back-three in front of him consisting of Harry Maguire, Victor Lindelof and Marcos Rojo.

Aaron Wan-Bissaka is certain to be in the starting XI and we want to see Brandon Williams on the opposite flank ahead of Ashley Young. The youngster was excellent on Thursday night, earning well deserved praise from Solskjaer.

There may be a shout for James Garner to be included in the team from the start this weekend, but I think Solskjaer will bring Fred back into the team alongside Scott McTominay.

Up top, we can expect Jesse Lingard to play behind Anthony Martial and Marcus Rashford. (Daniel James unlucky to miss out, really should be starting ahead of Lingard…)

Daniel James unlucky to miss out.