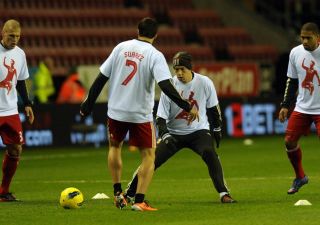 Glen Johnson has insisted Luis Suarez is not a racist — as he gave a half-arsed ‘backing’ to Jamie Carragher’s apology to Luis Suarez.

The apology, eight years late, was over Liverpool players wearing supportive t-shirts of Suarez after the Uruguayan striker was found guilty of racially abusing Evra by The FA in 2011.

Now Johnson — who was one of the Liverpool players that wrote the stupid ‘Suarez 7’ t-shirt — has told talkSPORT: “Carra was right to apologise and I’d have to agree with him; I think the timing of it was wrong as the ban was so close.

“But in the club’s defence, they were just trying to support one of their players.

“I don’t think anyone in that dressing room or at the club believed Luis was racist or capable of being racist.”

Firstly, the timing has nothing to do with this. It was a stupid decision made by Liverpool full stop and whether it happened a week before the ban or two months after, it’d still be totally unacceptable!

Then Johnson comes in with a big BUT…

There are no buts in this situation, whether he was a teammate or not, Suarez was found guilty of racially abusing a fellow footballer. That’s the bottom line and there’s no getting away from it.

As a black footballer himself, Johnson is doing more damage than good with these comments, as he continues to support Suarez after what he done.

Johnson went on to back up his claim by saying he “wouldn’t be friends with a racist,” adding: “I know Luis really well.

“I get on well with him, so I find it very, very hard to believe that he would have done something like that.

“It’s a very sticky situation for me — I’m stuck in the middle because Luis and I are good mates, and I wouldn’t be friends with a racist.

“I wouldn’t be. I’d be the first to turn my back on him and that’s why it’s awkward for me.”

Rio Ferdinand opened up about the situation earlier this week on BT Sport and urged Liverpool to follow in Carragher’s footsteps by apologising to Evra.