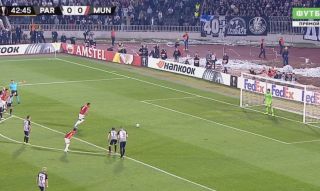 Manchester United have opened the scoring against Partizan Belgrade in the Europa League.

Left back Brandon Williams entered the box on a strong run before being fouled — and the Partizan players can have no complaints.

Anthony Martial stood up and quietened the Partizan fans by sending the goalkeeper the wrong way for his third goal of the season.

The United fans, absolutely delighted with Martial’s finish, gave it back to the home crowd after he had scored.

Watch the goal below (footage from beIN SPORTS):

Now United go in at half-time with a one goal lead.