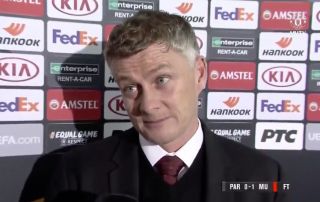 Ole Gunnar Solskjaer has reacted to Manchester United’s 1-0 win over Partizan Belgrade, our first away win since March.

United made hard work of tonight’s victory and yet again in the second half invited pressure from their opponents.

Solskjaer acknowledged how our defending from the front wasn’t good enough and partly responsible for United sitting deep after the interval.

He said, as quoted by the Manchester Evening News: “Second half I thought we dug in really well in the box, defended really well in the box. They played well [in the] second half [and] made us defend too deep. I’m not happy with the defending at the front. I think that’s been one of our strengths this season but I thought that was non existent in the second half. That needs sorting out because we don’t want to be a team who is just defending in the box.

When asked about the young players, James Garner and Brandon Williams, Solskjaer added: “I thought Jimmy grew into the game, did really well in the end — got tired in the end which is normal. And Brandon MOTM absolutely excellent, fantastic attitude, great defending, great in the air, gets us the pen by driving the ball forward, brace, we have found a left back there.

“The atmosphere was excellent, intimidating but we gave them loads of encouragement. Our players had to step up and calm the crowd down — we couldn’t — but Brandon, I don’t think he put a foot wrong.”

The boss gave his immediate reaction in an interview with MUTV — which you can watch below, as per the official @ManUtd Twitter account.