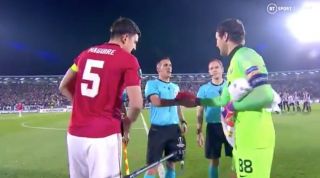 Harry Maguire’s first game as Manchester United captain didn’t get off to the best start as he made a blunder before the game even kicked off.

Watch the bide below from BT Sport which shows the England international completely forgetting his role as captain for the coin toss.

And he forgot to stick around for the coin toss 😂 pic.twitter.com/eanTEx0ccM

Maguire eventually realises that he needs to run across to the referee before a decision is made to see how kicks-off.

United are away to Partizan Belgrade and thus far the atmosphere is very good — no trouble like some feared.

Though we should never speak too soon!