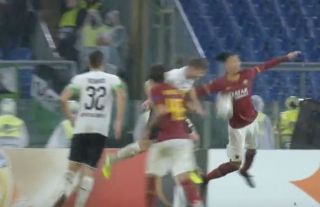 Chris Smalling gave a penalty in the 94th minute as Roma drew with Borussia Monchengladbach tonight in the Europa League.

The England international, on loan from Manchester United, gave away a penalty after the ball strikes him in the face.

The referee clearly thinks the ball struck his had but it the replays, as seen below via BT Sport, show that wasn’t the case.

He gives away a penalty in the 94th minute 😶

AFTER the ball strikes him in the face 🤦‍♂️

Meanwhile in the Europa League, United beat Partizan Belgrade 1-0 and now only need a win on match day four to book a place in the knockout stages.

United defender Harry Maguire made a blunder tonight before kick-off.

On the night he was handed the captain’s armband, Maguire completely forgot about the coin toss before the game started.

We can laugh at these things knowing United took three points on the road for the first time since March.