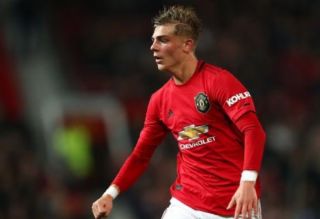 Manchester United took all three points from their away trip to Belgrade with a 1-0 win over Partizan Belgrade.

Anthony Martial scored the game’s only goal from the penalty spot after Brandon Williams was fouled inside the box on the brink of half-time.

Young Williams was excellent at left wing back — definitely in contention for the man of the match award — and fellow youth team player James Garner made some clever exchanges too.

It was much of the same from United. Poor in the second-half, often put on the back foot, and unable to score a second.

We got away with it tonight but the Red Devils must learn how to put teams away. Not only is it important to do so in the Europa League, which we should be trying to win outright this season, but in the Premier League too.

A win on match day 4 will confirm United’s place in the Europa League knockouts.

A number of United fans took to Twitter at full-time to react to the win over Partizan. Here’s some tweets below:

That was dross on a Moyes/LVG level.

We should just offer to give away players like Phil Jones for free to a club like Yeovil Town or someone like that, but then again, I’m not sure they would have him.

Let’s just be real for a minute.

Solskjaer has been here for almost a year, had a full pre-season (with no major international tourn.), had a full summer window, got rid of players he didn’t want, bought players that he did and there’s still no evidence of any playing style.

Brandon Williams wins Man of The Match hands down.

Absolutely light years ahead of anyone else on the pitch.

Superb from the teenager. pic.twitter.com/j4w0D99CM8

As long as Brandon Williams is fit, he should our main starting left-back. Luke Shaw is simply injury prone and he’s very inconsistent to be the number one left-back at the club.

Remember when people thought Phil Jones was better than Chris Smalling? Bloody hell, Jones was once regarded as a future club captain now the worse player on the pitch against Partizan Belgrade.

Brandon Williams has been our best player today.

Brandon Williams has comfortably been Manchester United’s Man of the Match.

All I’ve taken from this game is that Brandon Williams should start against Norwich.

This club left us with a finished Jesse Lingard and a legless Juan Mata to create chances for us until January all because they didn’t want to pay up to improve us. Sickening.