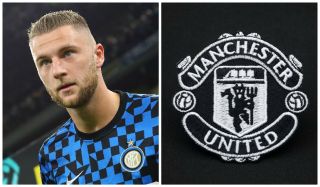 Milan Skriniar has spoken about speculation linking him to Manchester United.

The Inter Milan centre-back was regularly linked a move to Old Trafford before the Red Devils signed Harry Maguire in the summer, while he has also been mooted as a potential Man City target.

It could make sense for City to go in for Skriniar in the near future — after losing veteran Vincent Kompany during the summer and not signing a replacement — but Solskjaer may also need more defensive additions if Victor Lindelof doesn’t improve alongside Maguire.

The United boss also has Axel Tuanzebe at his disposal. Emerging from the Academy and impressing on loan whilst at Aston Villa, the 21-year-old has hardly put a foot wrong when called upon this season.

Tuanzebe was named in the line-up to face Liverpool on Sunday but sustained an injury in the warm up and hasn’t traveled to Belgrade with the squad to face Partizan tonight.

Skriniar told German outlet Ruhr Nachrichten that he is aware of media reports about his future but no concrete offer was made for the defender to leave Inter Milan.

“I can read,” he said. “There is a lot written on the internet, so such information also finds its way to me, but I do not worry about it.

“The transfer window is now closed, the next opens in two and a half months.

“Personally, I did not receive any specific offer, but there were clubs like Manchester City, Manchester United and Barcelona [written] in the media.”

Between Skriniar and Kalidou Koulibaly, there are two centre-backs in Serie A destined for big moves in the future.

It was a surprise that neither were part of transfers last summer.