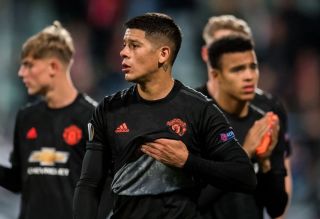 Michael Owen has his doubts about whether Manchester United have what it takes to beat Partizan Belgrade tonight in the Europa League.

After a promising draw against Liverpool on Sunday, Owen still doesn’t fancy United to come away from the match with three points.

The former footballer turned pundit told Bet Victor: “Both sides have four points from their opening couple of group games and I feel it will be honours even in Belgrade.

“Partizan are unbeaten in their last 11 home ties in European competition although they have only won four of their 16 group games in the Europa League.

“United are unbeaten in their last 13 Europa League games and have kept a clean sheet in nine of those ties.

“A point would not be the worst result for either side from a game which I believe will be short on goal scoring opportunities.”

Owen’s prediction for a draw is fair given our form of late, but it’s only a matter of time before Ole Gunnar Solskjaer’s side get back to winning ways.

United are still struggling in front of goal which makes it difficult to grind out results.

Partizan will know that but Solskjaer must also come up with a way for his attacking players to flourish.

There can be no more excuses with Anthony Martial back fit and ready to play.

The Frenchman returned to action last weekend as a substitute in the 1-1 draw against Liverpool.

Tonight’s game gives the manager a good opportunity to play Martial and help him reach full match fitness with some important Premier League fixtures coming up.

Moreover, Solskjaer needs to demand a greater goals return from Marcus Rashford, who scored the only goal against the Scousers.

It wouldn’t surprise us if the England international was rested tonight — or named on the bench at the very least.