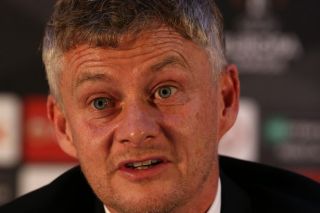 Manchester United are prepared to follow the Uefa protocol and walk off if our players are subjected to racist abuse during their Europa League clash with Partizan Belgrade in Serbia.

Partizan’s stadium is open again to all supporters after they were ordered to play two matches behind closed doors following racist behaviour in the stands during their Europa League qualifier against Yeni Malatyaspor in August.

Former Aston Villa player and Partizan coach Savo Milosevic has pleased with supporters to behave themselves when the Red Devils come to town, as reported by the Daily Mail.

Solskjaer echoed those comments but revealed that Harry Maguire and Marcus Rashford had provided input during a team meeting after what they experienced when away with England in Sofia, Bulgaria.

READ MORE: ‘Get him at all costs’: Loads of Man Utd fans urge Solskjaer to sign 19 y/o striker with Champions League record

England hammered Bulgaria 6-0 earlier this month but racism dominated the headlines after Rashford, Tyrone Mings and Raheem Sterling were taunted with monkey chants.

“In the aftermath of what happened in Bulgaria we had a meeting with the boys,” Solskjaer is quoted as saying via Manchester Evening News. “And, as Harry said, we’ve gone through the protocol.

“But I believe in people and I’m sure the atmosphere here will be fantastic, we’ll try to keep them quiet by playing good football. We trust Uefa and, as Savo said, hopefully it’s a celebration of good football.

“We’ve spoken in general on subjects but of course Harry and Marcus, who were in Bulgaria, they were freer to talk about the atmosphere, how it was, what we can expect, what’s the worse case scenario.”

The club acted quick and appropriately over the weekend to tackle racism at Old Trafford after a United fan was banned after being ejected from the stadium during the 1-1 draw with Liverpool on Sunday for racially abusing Trent Alexander-Arnold.

Echoing our views, Solskjaer added: “I’m happy the club have identified him. What[ever] you want to call him, it’s something we feel strongly about and are going to stamp down on as much as we can.”

United defender Maguire was also in attendance at Wednesday’s press conference, saying, “We will trust Uefa to follow their protocol with the three steps. Obviously Sofia was a sickening atmosphere, it was something I don’t want to be part of again.

“We’re positive tomorrow night will be a great atmosphere, one we’re all looking forward to playing in. If something does go off then we’ll follow the three step protocol and I’m sure there will be people on and off the pitch doing their bit to make things better for the future.”

Moreover, Liverpool came in for some criticism over a racist banner seen in their end last night. The European champions beat Genk 4-1 after the club condemned actions from their own fans, as reported by Sky News.

Hopefully everyone has a good trip and enjoys Belgrade. Football, pints — no racism.