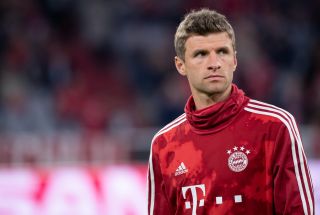 Manchester United are looking to sign a striker in January and German reports suggest a move could be made for Bayern Munich star Thomas Muller.

At the beginning of October, Stretty News suggested that Muller would be a target for the club following news the German was seeking permission to leave the Bundesliga champions in the winter transfer window.

Ole Gunnar Solskjaer needs a goalscorer after allowing Romelu Lukaku leave for Inter Milan in the summer, though to suggest he shouldn’t have let Alexis Sanchez go on loan would be clutching for straws as the Chilean joined United in January 2018 and disappointed throughout his time at Old Trafford.

United forward Marcus Rashford has been unable to fill that void and Anthony Martial has only returned from an injury that kept him out of action for eight weeks.

The publication and journalist responsible for breaking the news about Muller wanting to leave Bayern has popped up again, stating that United are interested in signing the forward.

It’s not common practise for a journalist to tag a footballer’s personal Twitter account when covering transfer speculation, which may or may not suggest where the whispers are coming from. Flak did the same earlier this month when revealing news Muller is seeking a transfer.

If Muller wants out of Bayern his representatives will be aware of the publicity he’ll get if linked with the Red Devils.

Though this may well appeal to Solskjaer who needs to sign a forward in January.