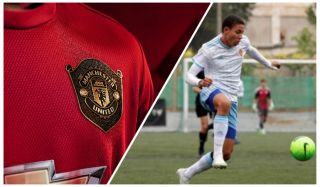 Real Madrid were said to be interested, but the Red Devils moved first and agreed a fee without having to get a tribunal involved.

Yet nobody seems to really know when the younger will actually be a United player.

READ MORE: Man Utd prepared to walk off if players are subject to racism vs Partizan Belgrade

Some reports sound like it might go through in the future, but El Periodico de Aragon suggests he joined in the summer and is already part of the U18 team.

Confused? So are we…

Real Madrid won’t like the idea of losing out on one of the most exciting talents coming out of Spain at this moment in time, and this is certainly one one of those stories that could be huge in a few years.

The Sun adds that Mejia scored over 60 goals in the Zaragoza youth team, so it sounds like he has a prolific streak about him in front of goal.

Mejia is one for the future, make no mistake about it.