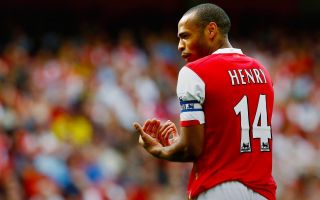 Aaron Wan-Bissaka has named Arsenal legend Thierry Henry as his idol growing up.

The Manchester United defender doesn’t say if he grew up supporting the Gunners, not that we’d have an issue with that, really, but in the video below he tells FootballJOE that he used to be a striker and wanted to play like Henry.

“I still speak to Wilfried Zaha as he was at United. He’s just told me to keep my head down and keep working hard.”@AWBissaka talks about his start to life @ManUtd and coming through the ranks at Crystal Palace.

To be fair, what young striker out there wouldn’t want to become the player Henry was?

The Frenchman is up there with the best strikers to have graced the Premier League — but Wan-Bissaka will hope one day that young defenders see him as an idol.

Wan-Bissaka joined United from Crystal Palace in the summer and has got off to a decent start, making the right-back role his own, and is already the best option we’ve had since Gary Neville.

Now he must continue to develop and work hard to become the best right-back in England, maybe even Europe.